One Saturday night, my friends and I had planned to a Movie followed by dinner. But all our plans got affected as it started raining heavily. So we decide to watch a film at home and get food delivered at home. So everything was ready, film, food and also the main attraction of the night. Black Dog Scotch One of the world’s finest Scotch Whisky. 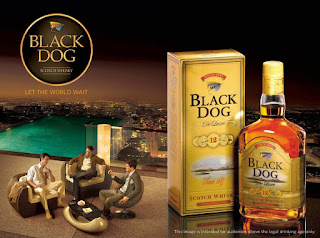 We decided to watch “The Cabin in the Woods” An epic Horror and Mystery thriller. This film is about Five friends who go for a break at a remote cabin in the woods, where they get more than they bargained for. Together, they must discover the truth behind the cabin in the woods. The endearingly playful, dazzlingly unpredictable movie that follows — and I’m not going to spoil it by telling you too much, This is a hugely entertaining, brilliantly crafted entertainment that’s witty, ground-breaking and  most important of all fun. This film shows Hollywood at its best.

As the film was getting interested we all started enjoying Black dog World’s finest Scotch with 130years of Legacy! The whole film was gripping and there were a few scenes in the film which made us scream out of fear. As a typical Boys night out a lot of Pizza’s was had along with Black Dog Scotch! Once the film was over we started talking about the film, each one trying to explain how he felt the movie was. This was the funniest part as each one of us thought film could have a different ending with a different twist and turn.

What was supposed to be a Dinner with Movie weekend was transformed into a Guys night out with an amazing film and as always Black Dog the true Scottish brand with a history of 130 years helped us to unwind & relax after a hectic week!  Finally we decide not to go any films anymore but to have night outs like this..