Last year there was a Wine Festival in Bangalore, as blogger I was invited to be a part of the festival. There I picked up a bottle of Four Seasons Wine. Let me tell you more about Wine and also about Four seasons. 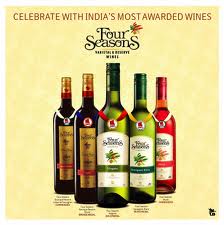 First of all Let me tell you what is wine?
Wine is a product obtained from total or partial alcoholic fermentation of fresh grapes, whether or not crushed, or of grape must.


Sparkling Wines:
Sparkling Wines is a wine with significant levels of carbon dioxide in it making it fizzy. The carbon dioxide may result from natural fermentation, either in a bottle, as with the méthode champenoise, in a large tank designed to withstand the pressures involved (as in the Charmat process), or as a result of carbon dioxide injection.
Fortified Wines:
Fortified wines are created by the addition of brandy or neutral spirit to the grape juice about halfway through the first fermentation. This raises the alcohol level- thereby killing the yeast – and also preserves the sugar in the unfinished wine. Fortified wines can be white, red or Rose.

Dessert Wine:
Sweet wines typically served with dessert. Despite their name they are often best appreciated alone or with fruit or bakery sweets.

The varietals of Wine's available with Four Season's are as follows:
The Set of information about Four Seasons Wines are available here.

I picked up a Four Seasons Barrique Reserve CabernetSauvignon, Some of the Tasting Tips of it are giving below. 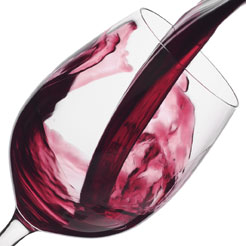 Serving suggestion: Enjoyed best at 18 -20º C . A fine wine to go with fine cousine like slow roasted ham,terderloin,rack of lamb and even roasted vegetables. Old cheeses like comte,beaufort and abundance also pair this wine. Ready to drink now but connoisseurs will realise that this wine will age well over 5 years.