Black Dog Scotch Whisky always supports different kinds of entertainment programs in India. They organize the Black Dog Easy Evenings where you can listen to great music. Similarly they organize Black Dog Comedy Evenings where they invite local and international comedians to come and perform. This way they encourage new activity of watching stand-up comedy in India. 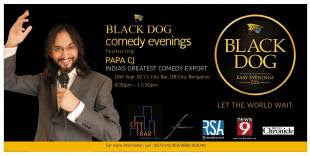 So it was really heartening to see that Papa CJ (India’s Comedy Export) was performing in Bangalore at Black Dog Comedy Evenings. Opening for Papa CJ was local talent Praveen Kumar. The event was held at the wonderful CityBar in UB city in Bangalore. The place was packed with lot of people who had heard of Papa CJ through his Youtube videos and wanted to catch up with him and listen to his jokes live! People started coming in to the City Bar by around 8pm. They were seen enjoying their Black Dog Scotch Whisky on the rocks or with soda. The smooth taste of the Scotch Whisky was really appreciated by most of the audience members.
Around 9pm, comedian Praveen Kumar came on to the stage and warmed up the audience slowly but surely with his jokes on IPL, Tamil people, Rajnikanth, Bangalore roads, lack of Bangalore nightlife, etc. He was saying his jokes with the accent of a tamilian speaking english which was really hilarious. People who didn’t initially know who Praveen was and why was he opening for Papa CJ, crackled with laughter and hooted as he continued entertaining us. 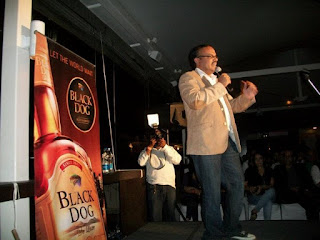 After entertaining the audience for 15mins, Praveen invited Papa CJ on the stage to thundering applause. 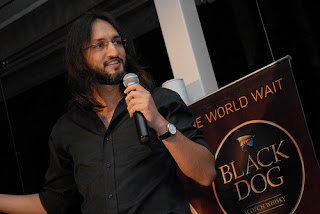 Papa CJ immediately became comfortable with the Bangalore audience as he joked about how far the airport was, how bad the bangalore roads were, how he could get arrested in Bangalore by just shaking his hips to a dance number. He had jokes on the characteristics of almost all the ethnic groups in India like Bengalis, Marwaris, Sindhis, Parsis, Punjabis and Delhities. It was amazing to see him have such a wonderful understanding of each of the ethnic groups not just in India but elsewhere too. Some of his rollicking jokes were how Michael Schumacher races with Delhi call centre driver in Indian F1 race and loses, what is the difference between Marwari women and Punjabi women and what does Susu mean in Bali. If you want the answers to these questions, you will have to just see his next show!
Useful Links: