The Longest Drive with Amaze

After the hugely popular Hangout with Amaze last August! Honda Cars India were back this tmw with another event of Amaze. This time it was called #TheLongestDrive to celebrate the resounding success Honda Amaze has had in India for the Japanese car maker and in just 16 months since the launch, the car has reached the 1,00,000 milestone number.

The drive was kick-started on 15th September 2014 from the royal city of Jodhpur and during the journey it met with enthusiastic Honda customers in various cities and towns and reached Bangalore on 18th of October.

The Bangalore event was held at The Oberai and with selected Honda Amaze customers to cheer for #TheLongestDrive team, Honda shared their pan-Indian experience and how the journey so far has been and the positive response it has generated for the brand both offline and on social media. 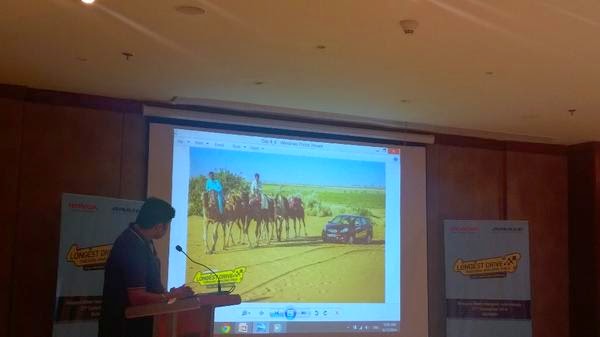 We drove the Amaze along with the Amaze Longest driving team to cheer them! And bid them farewell as from Bangalore, the longest drive will go down south all the way to where the land meets the three seas, Kanyakumari and then traverse the picturesque Western Ghats to finally culminate the drive at Greater Noida.

The Honda Amaze was declared as the “Car of the Year” and “Compact Sedan of the Year” by leading automobile magazines and has clinched 12 major automobile awards in 2013 – 14.
Author Vinay Kashyap On November 06, 2014
Labels: Experience