Apigee, one of the leading API platform providers in the world conducted ‘Apithon’ – an exclusive hackathon for select ‘app’ developers from across the country in Bangalore.

The 36 hour hackathon (December 13th to 15th) was aimed at promoting a new way of application development by engaging developers across South India to learn the new programming paradigm. The three day event witnessed active participation from some of the leading developer communities including BangaloreJS (Bangalore Javascript Community), Blrdroid (Bangalore Android Developer Group) and many more who came together to create effective and innovative applications and processes for the evolving digital landscape in India. The participants designed and shared ideas based on themes 3 Tier App and Mashup APIs. 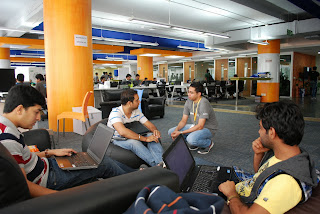 3-Tier-App in mobile development is an alternate way to create the mobile stack. It is mainly focused on offloading data processing to a cloud infrastructure rather than the mobile itself. This saves the battery and computing power of the mobile. Mashup APIs leverage Apigee’s API platform to mashup different APIs in the cloud infrastructure itself instead of making multiple API calls from the mobile. Mobile app developers often have a need to expose their own APIs. Apigee’s platform provides a way to do that with minimal effort and zero cost. Both these themes are a proposal to architect the mobile stack in a different and efficient way, which is beneficial for both developers and end app users.

One interesting app was the one where the colors of the lights changed as per the music played. This was built during the Apithon itself while using the App platform provided by Apigee! As computing and connectivity dramatically increased over the years, the critical mass of computing power has moved further away from the center to the edge – from glass rooms, to office desks to coat pockets. This cumulative effect has brought us to the tipping point of a programmable world 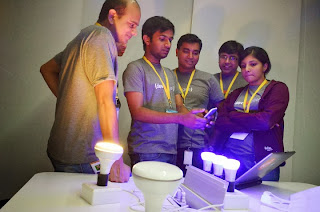 Speaking at the event, Srinivasulu Grandhi, VP and Managing Director, Apigee (India) said, “We are in the middle of a digital transformation and all businesses, large or small, need to develop a digital presence in order to survive. They need to create sustainable competitive advantage and win market leadership under the new rules of the programmable world. With Apithon, our aim is to create awareness for the developer community to learn new ways of programming and not just learn but hack to glory by building cool new, contextually rich experiences.” 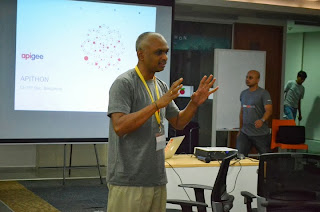 The mood of the event was very informal with developers being pampered with snacks around and bedding's rolled up. Most of the developers said that they have never felt so much comfort in other hackathons that they have attended. They were well taken care of by Apigee.

Mr. Grandhi also had chat with blogger from the City present at the event. 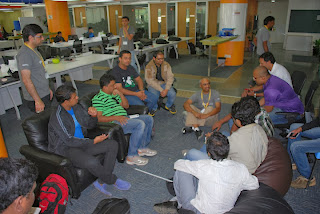