An Afternoon at Mai Tai Lounge


Recently a friend and Myself went to Orion Mall to check out the Mai Tai Lounge at the mall. Then we realised that they have started a whole new menu. We couldn't thank my luck as we were one of the first visitors to Lounge after the addition to the menu.. 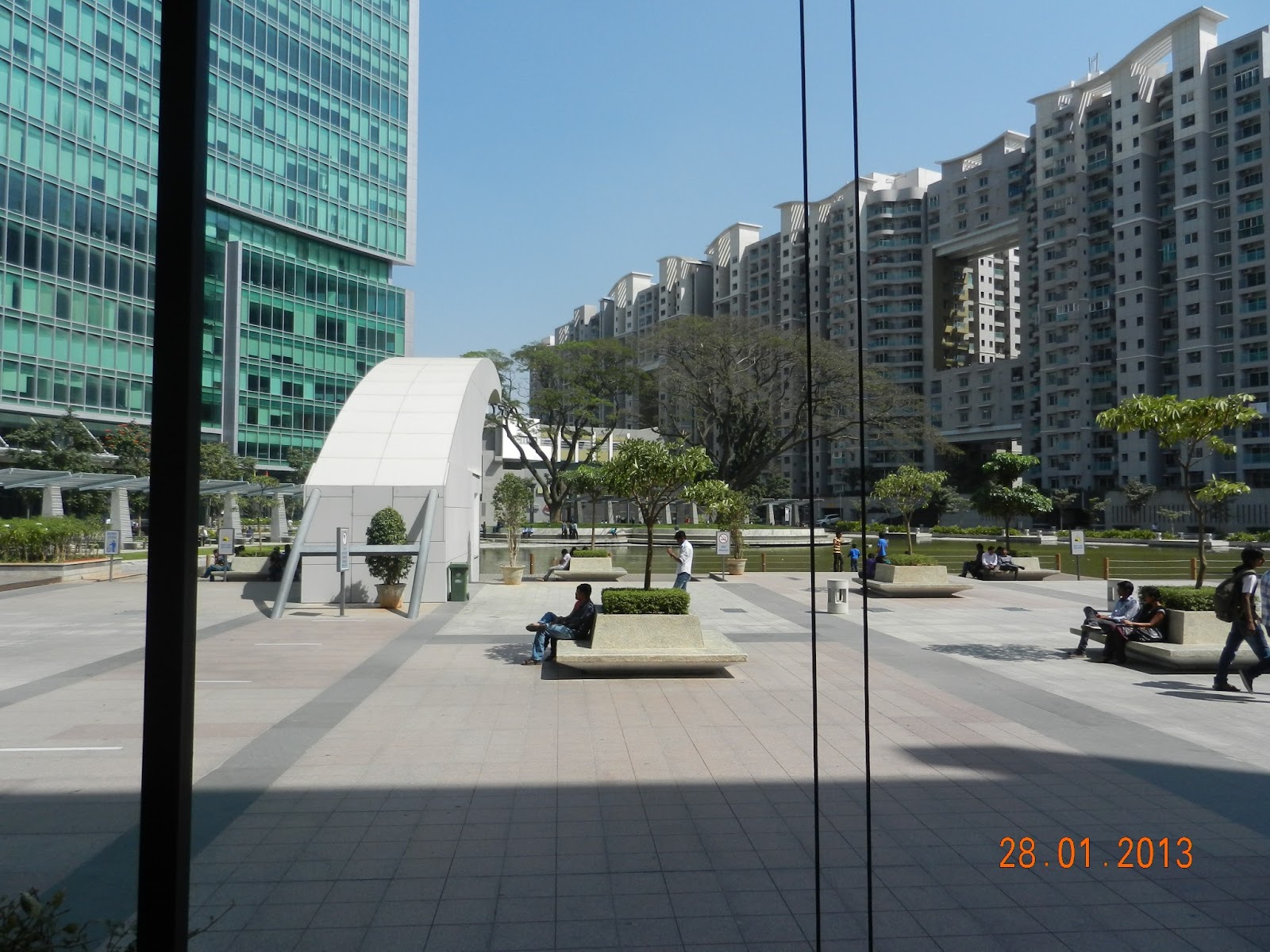 This hotel gives you the feeling of an European Hotel, Thanks to an amazing Man made lake right in front of the hotel.

So, once inside the hotel me and my friend settled on a table, the problem started. The menu had so many items, we were really struggling to decide what to order!!

Then like a god sent Messiah came Mr. Gautam Yadav, General Manager. Traders Vic Mai Tai Lounge to our rescue. He asked us if we had any problem, told him about the situation he was more than happy to oblige.

He asked us our preferences and ordered dishes the he thought will be liked by us,

First he got us a Mocktail called Coral Reef, 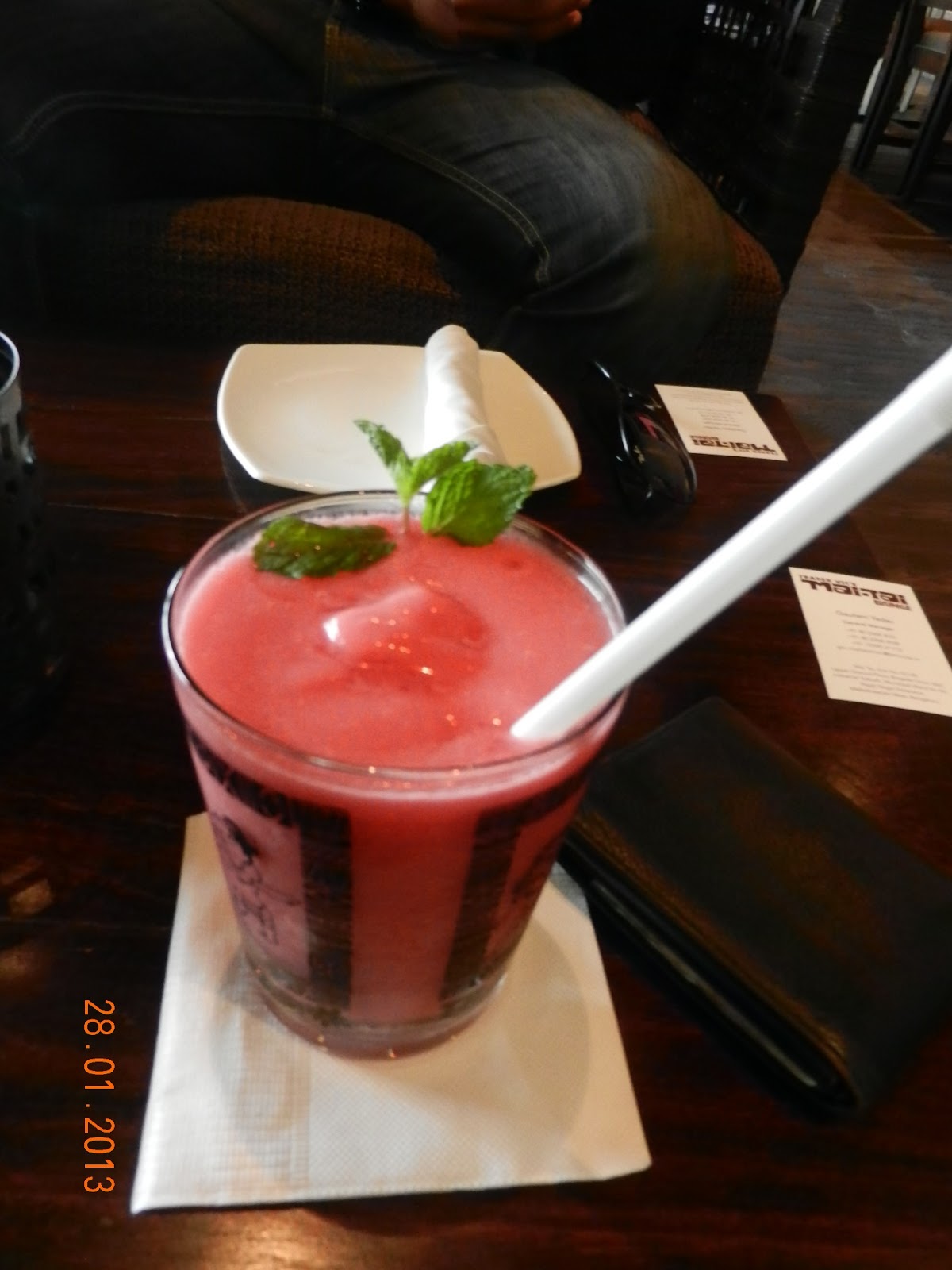 This Mocktail is made from Strawberries Mango and Coconut cream, had to be one of the best Mocktails i have add in a long time!! (Just had to Order one more)

Next up was Island Corn Cake, this consists of sweet corn and Veg cakes 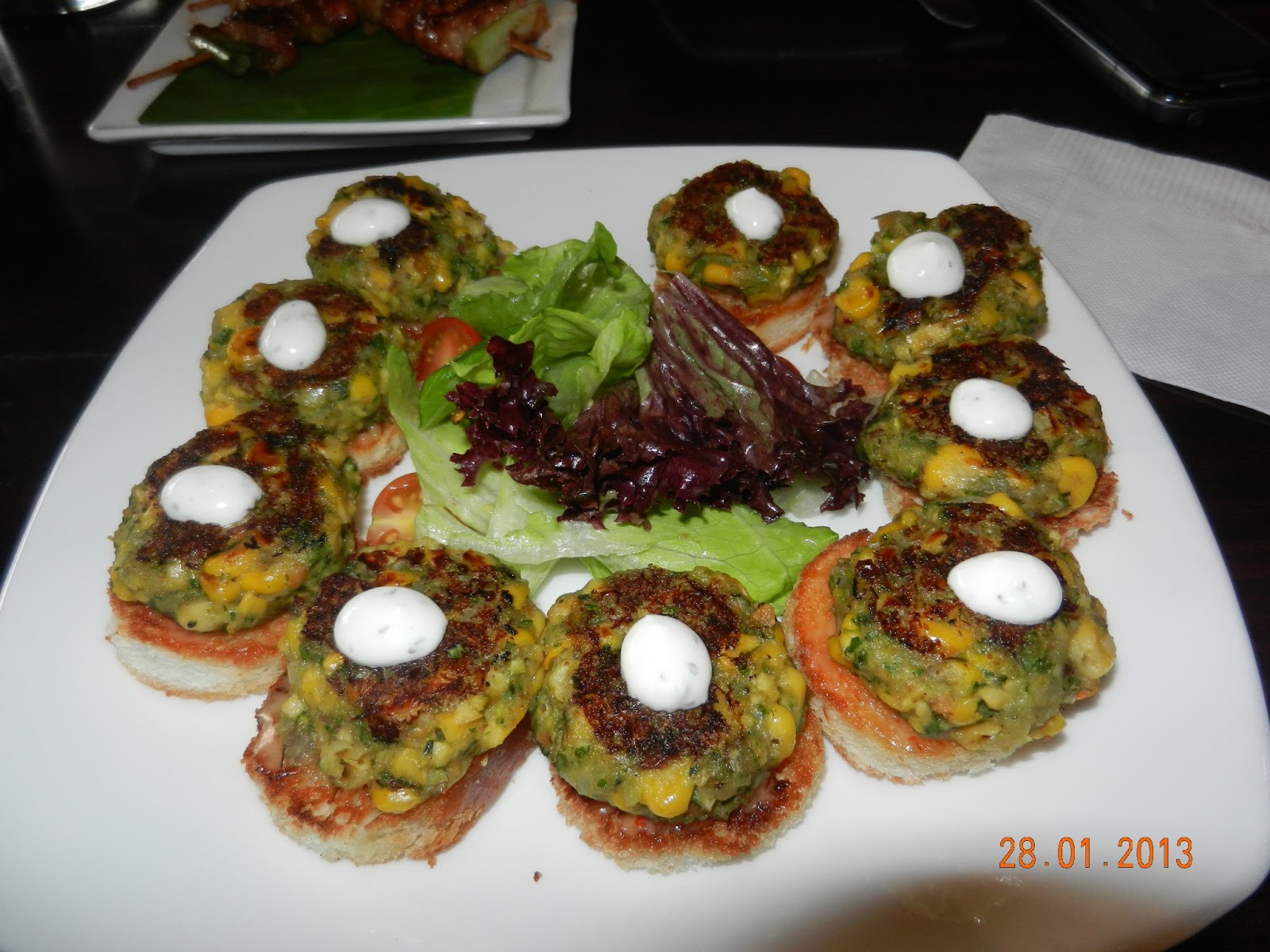 Next up was a Hawaiian speciality Grilled Huli Huli Chicken, as usual I let my friend taste! 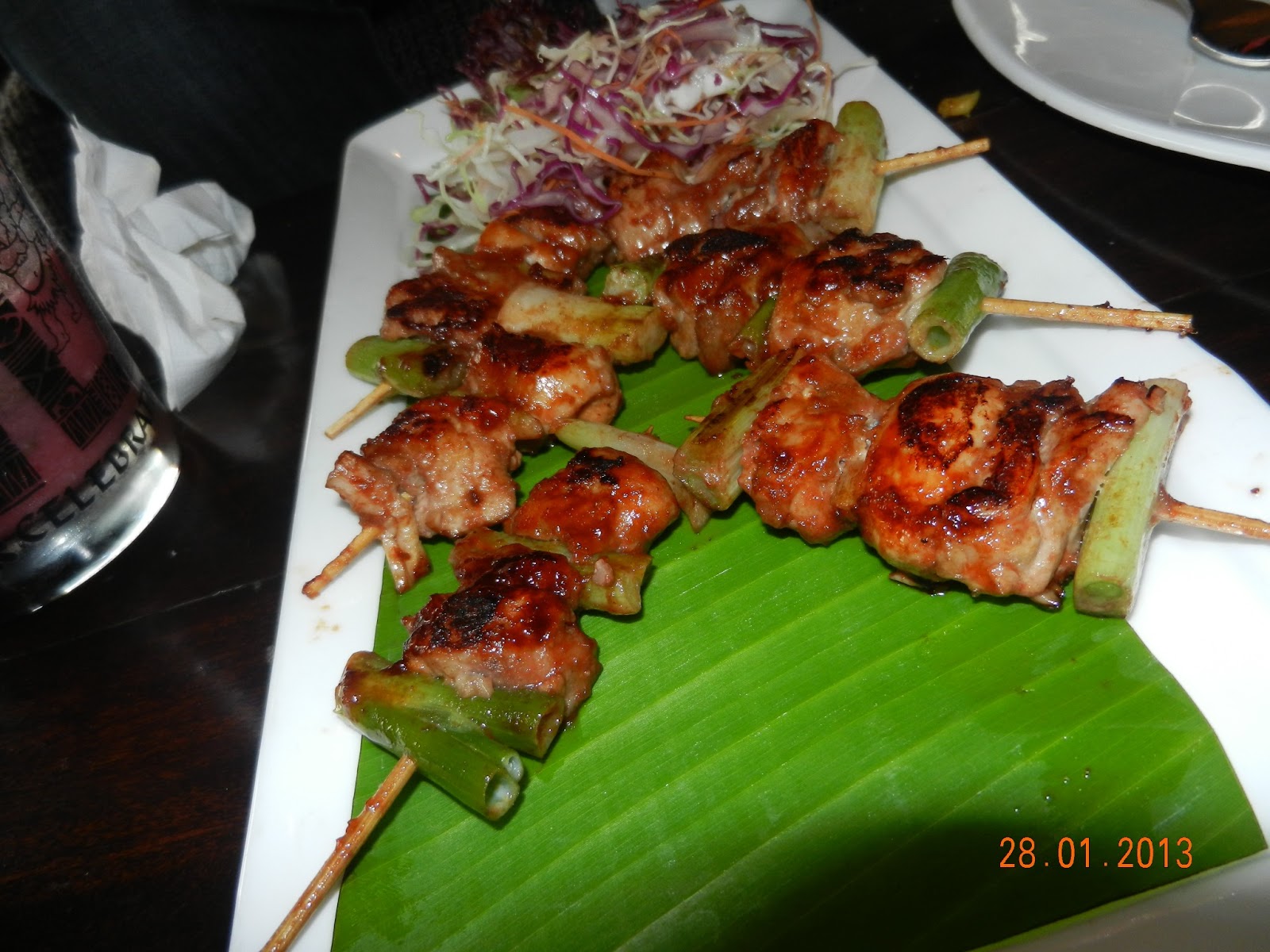 Huli Huli Chicken is boneless chicken skewers with grilled toppers. As my friend puts it "The best Chicken Skewers he has tasted ever"

The dish Cilantro and Scallion Prawns Skewers. My friend was still licking his fingers after eating huli huli chicken, 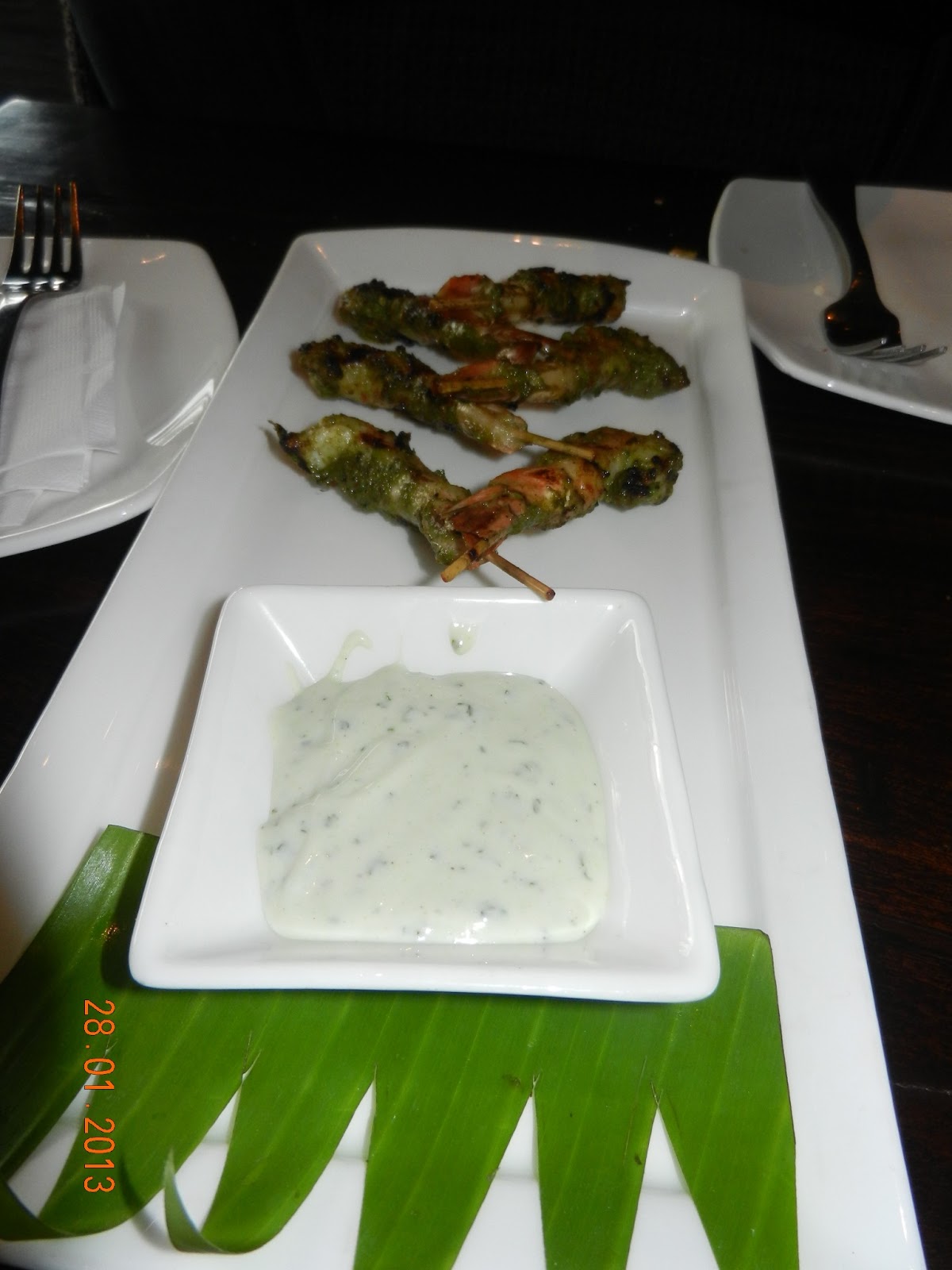 This was bursting with flavours of Cilantro, garlic scallions and given with Wasabi Mayo.. A delight for a sea food lover!

When the next dish arrived, I thought Mr. Gautam had forgotten that there was a Vegetarian in the house as this dish was Tsukuni. 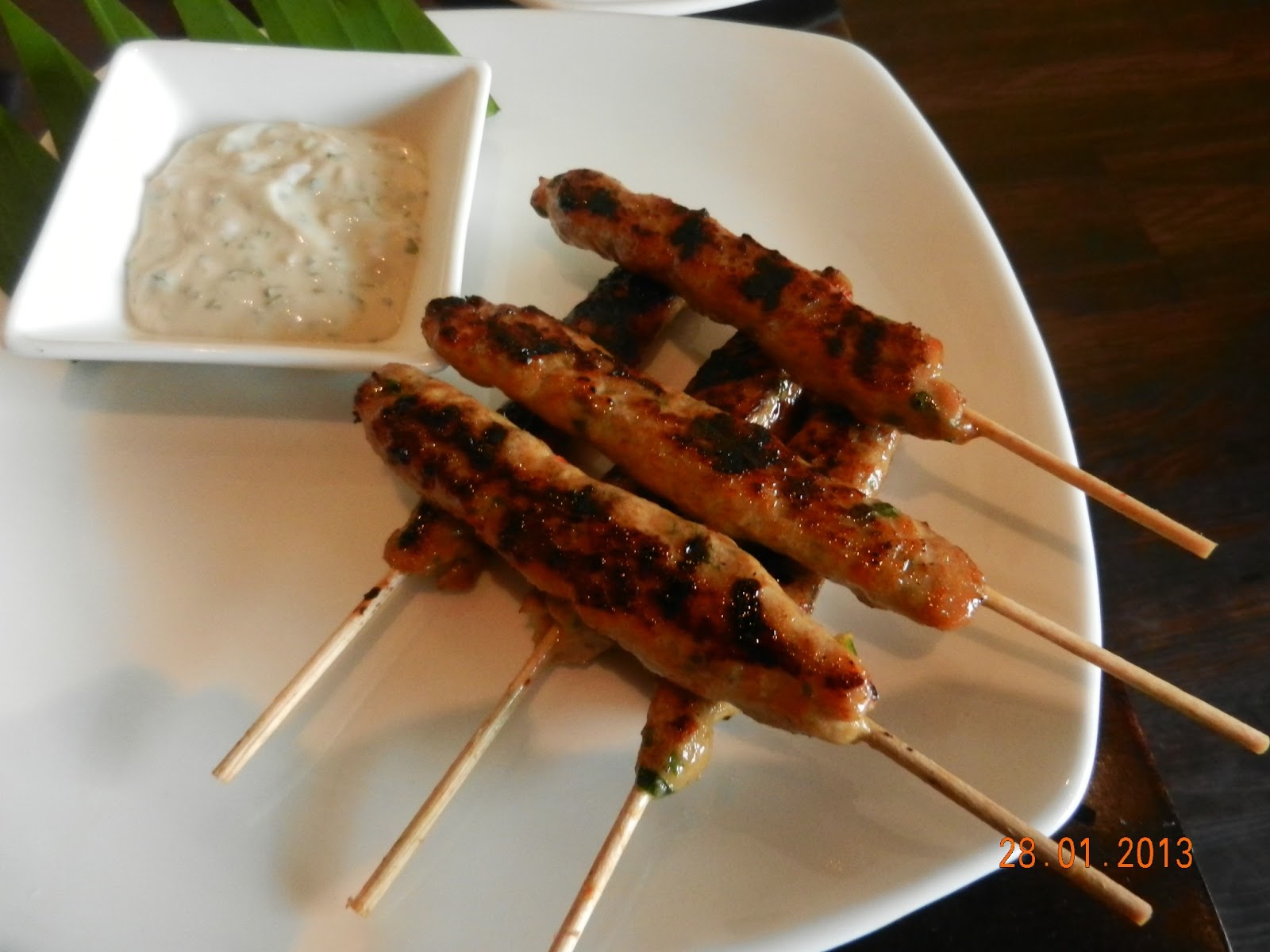 Tsukuni is made of Miso Soy Chicken skewers along with Asian Tarter Sauce! The Tartar sauce added that extra flavour required to make it a perfect chicken skewers.

Just as I was thinking of reminding about me, In Walked Mr. Priyank Singh Chouhan (Area Kitchen Manager South India at JSM) 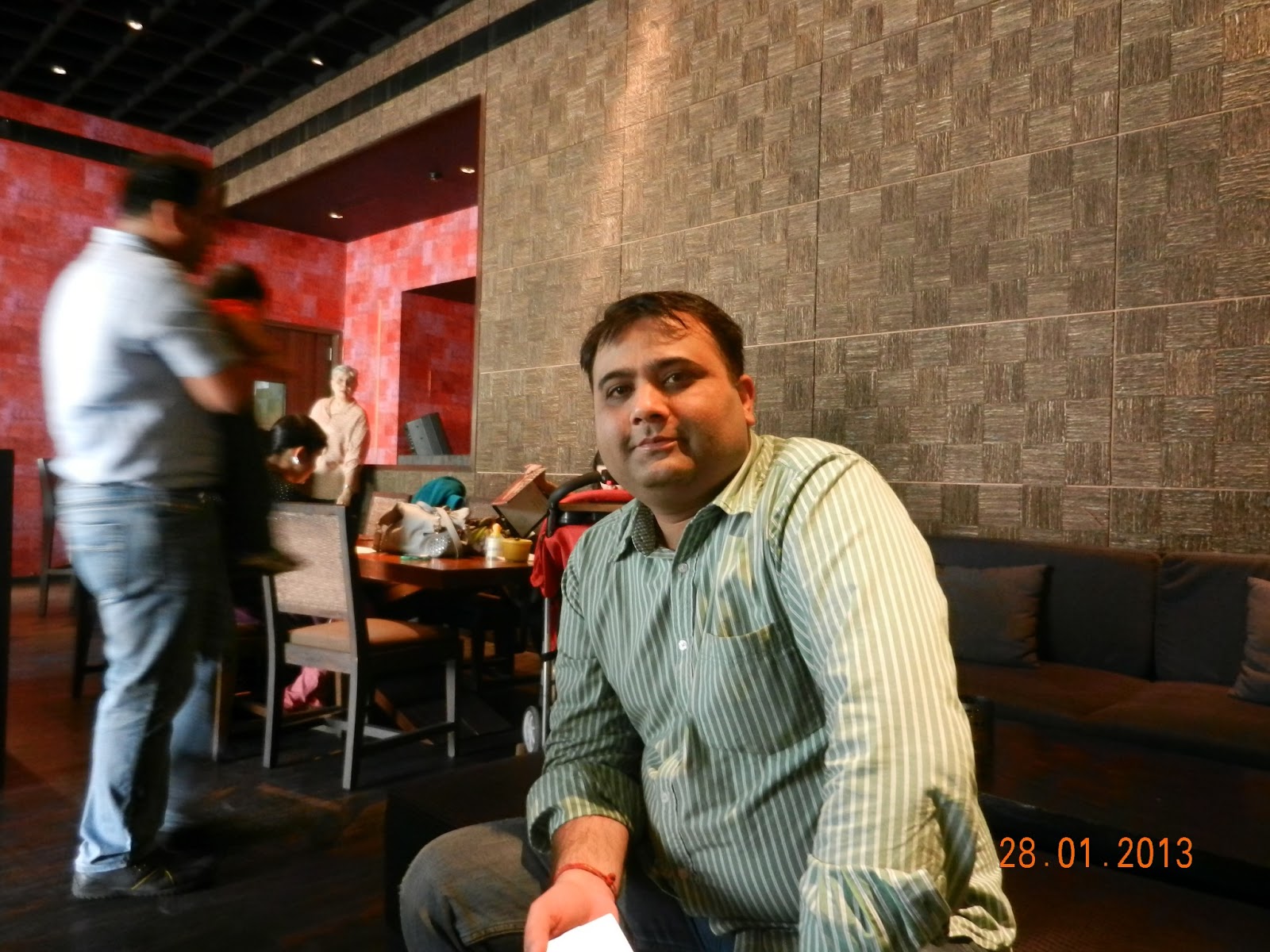 He came to me and said not to worry as he has ordered a Vegetarian few dishes of his choice specially for me!! As we waited for the dishes to be served, Mr. Singh explained how they at JSM have separate culinary utensils, the burners and even Oven for Veg and Non-Veg dishes. He says the trust of his Clients is more important than a few extra bucks that will cost them to setup everything separate for veg and non-veg! So all those who have this doubt about same knife being used to cut Chicken and Vegetables, you guys don't have worry about it if you visit Mai Tai Lounge! 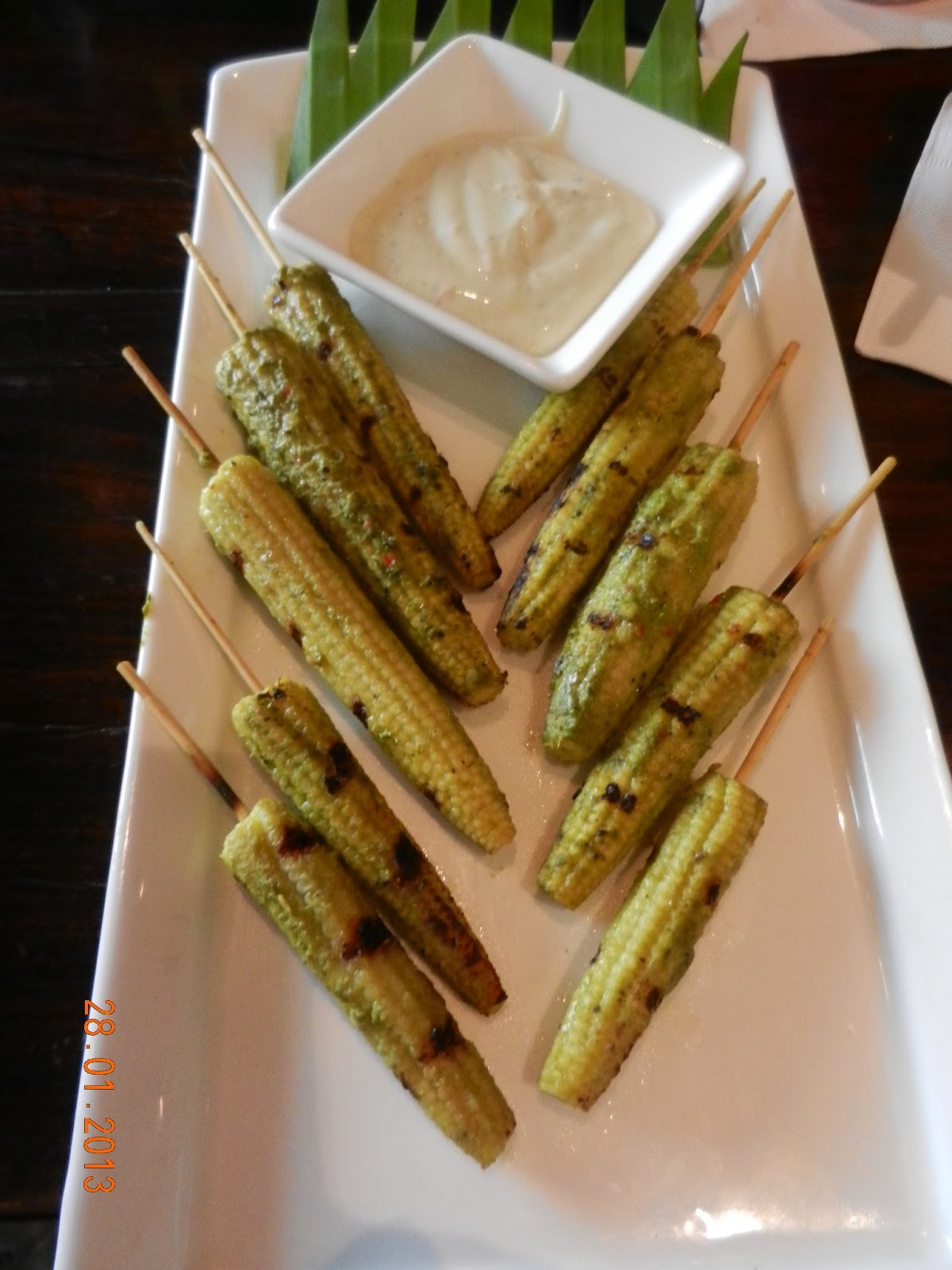 A tender grilled baby corn, Spicy scallion yogurt marinade. With mayo sauce. The baby corn was grilled to perfection, and the combination of Scallion yogurt with Mayo was perfect!!

The last dish was Baked Spinach and Potato Dip. As they say "the best was saved for the last" THIS had to be the best dish of the Afternoon.. 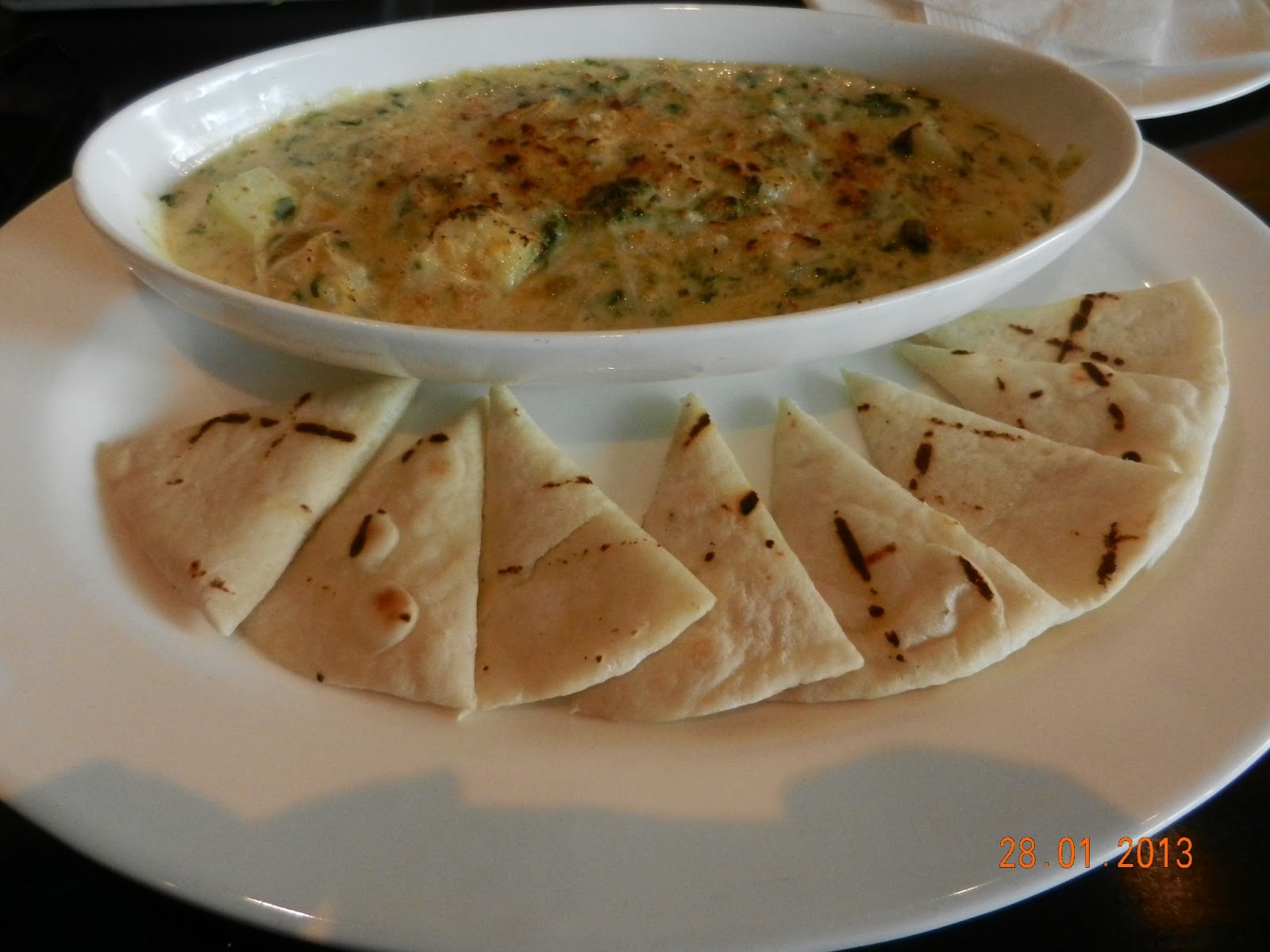 It was time for desserts and both Mr. Gautam and Mr. Singh asked us to select the desserts at least. So we decided to go for Coffee Creme Brulee, and Espresso Infused custard, with caramelized sugar crust! 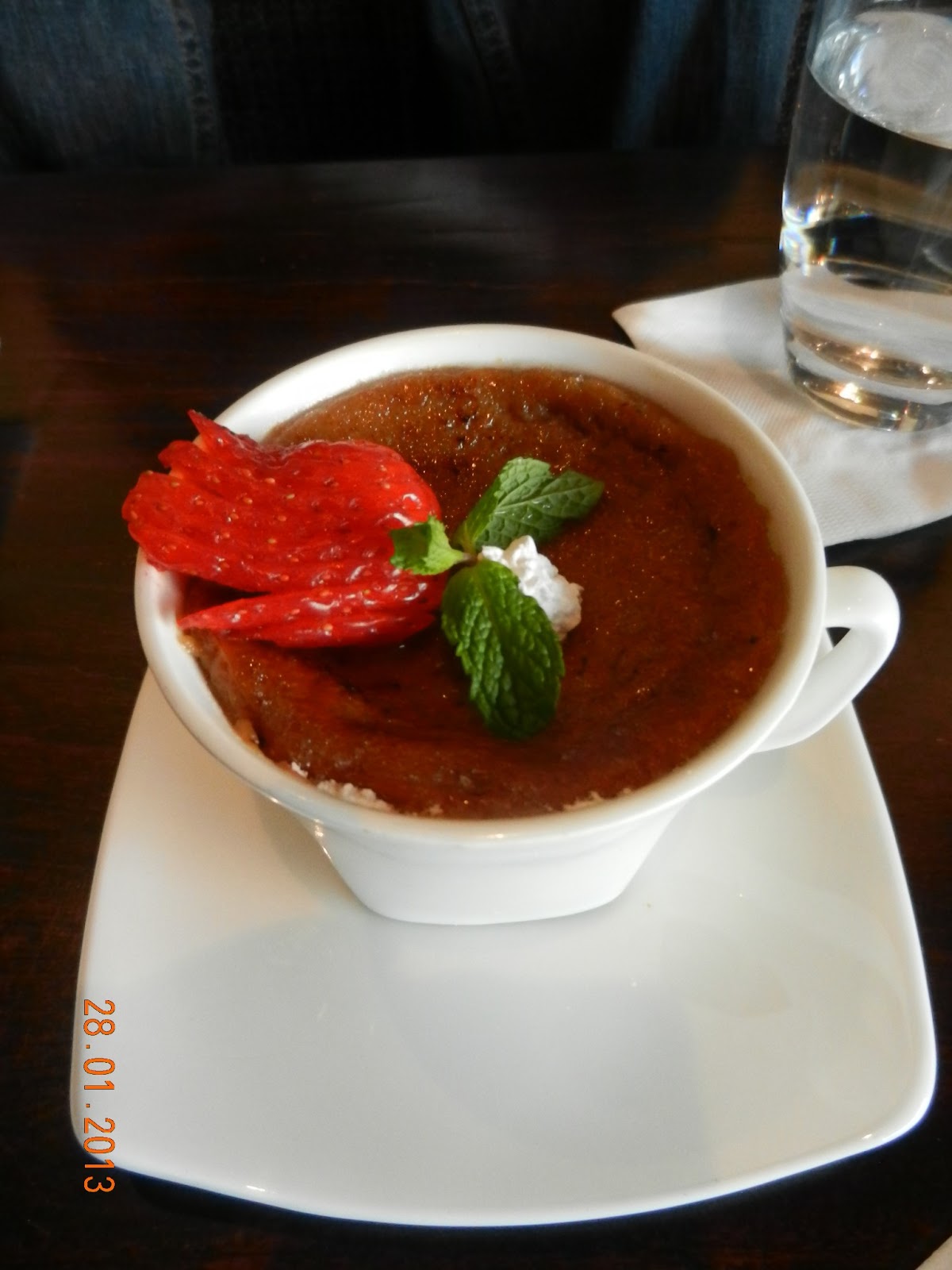 The second we chose was Chocolate Nut Tikis. This is a signature dessert from Traders Vic. 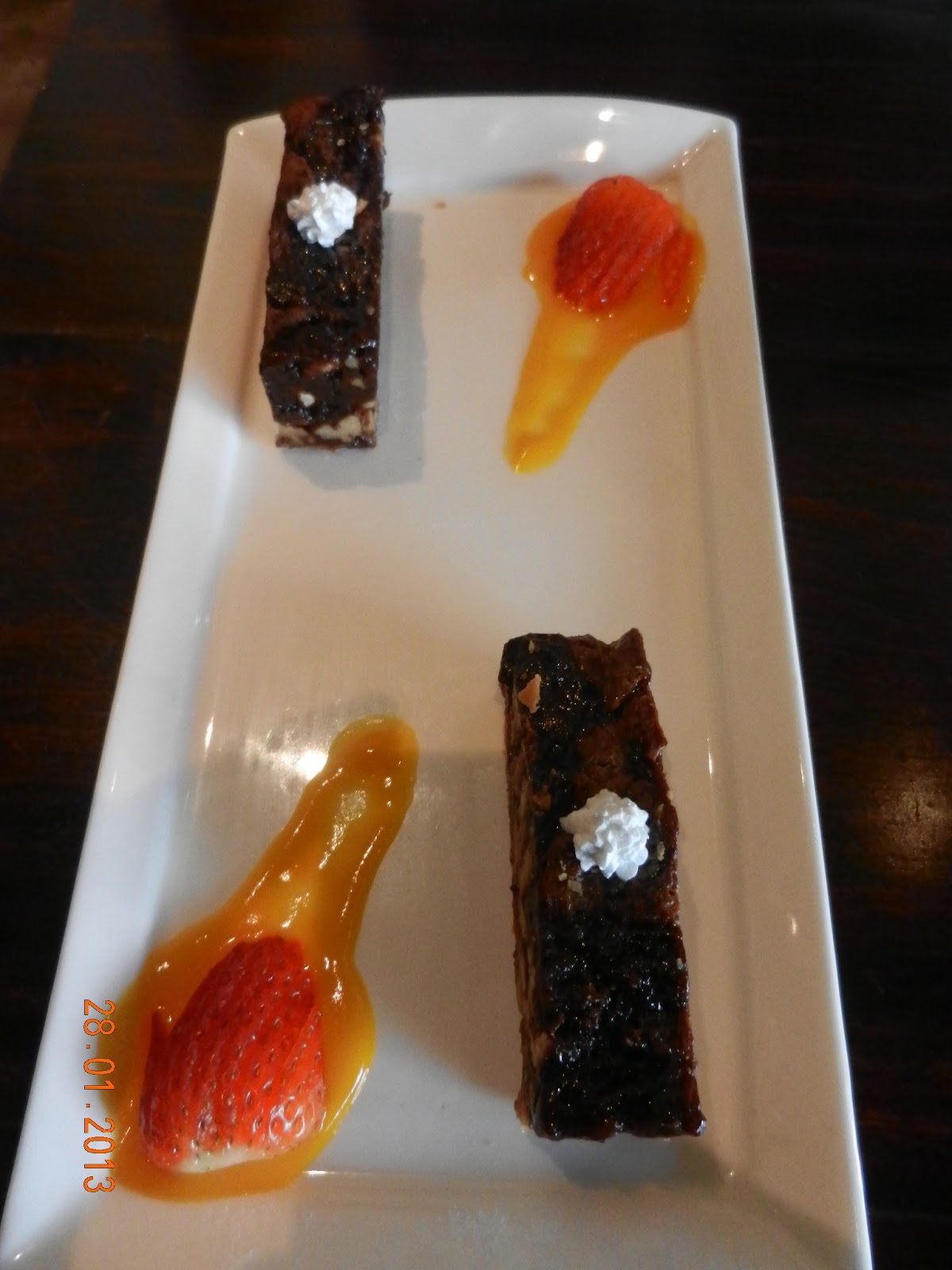 Finally after finishing the dessert we spoke to the Manager and told us about the Cocktails speciality at Mai Tai, we promised him that we will return to Mai Tai for Cocktails and also the Baked Spinach Potato Dip,