A Watch that also calculates your Steps

I have about 15 regular Quartz watches,(I am not lying) I thought let me buy something that has some new features apart from date and time. So I purchased a Moto 360 (1st Gen) and was using it daily, I got bored of interfacing with it. To see the time requires a flick of the wrist and to see my steps and fitness tracking goals requires opening the app or swiping up and about in Glances. 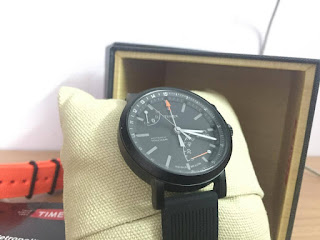 Though I like having a microcomputer on my wrist with access to notifications and a very cool set of watch faces, I wanted something simple without the hazel of charging it daily or sometimes twice in the same day, Then a friend suggested me to buy Timex Metropolitan+ after going through the specs of the watch I realized I just need a wearable which is basic as well as effective like the Timex's Metropolitan+.

This watch is made of brass and comes in either polished silver or matte black. It's thicker than most watches, but not to the point of discomfort, and comparable to a few other watches Timex sells, Watch is marginally thicker than the second-gen Moto 360, and thinner than a conventional Casio G-Shock watch.

Watch straps are also extremely easy to swap out with the unique quick release mechanism. Timex sells a variety of straps in nylon, leather and silicone. My favorite is the nylon in neon orange; it's bright and gives a trendy look to the watch. I tried and swapped in the 20mm Horween leather band from the Moto 360 and it fit perfectly and looked as if it’s made for each other. 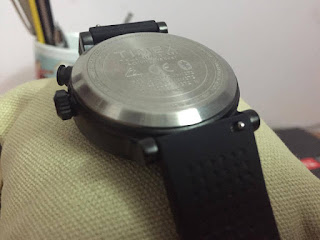 Features: -
The Metropolitan+ tells you four things —
Checking them doesn't require swiping around on a tiny screen.
The watch's activity tracking is cleverly and subtly integrated into the watch face. There are two additional dials on the Metropolitan+:
To check how much you've walked and how far you've walked, just press and hold down the pusher button (that's the one at the two o'clock mark). Doing this will cycle between the four modes: "S" for steps, "D" for distance (miles), Bluetooth (for syncing data to a phone) and Off. 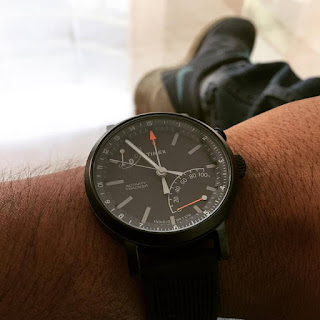 Switching between steps and distance mode is easy and seeing both my approximate activity data and my goal percentage at once is quicker and more intuitive than checking an app. And if I'm not interested in my activity data, it's a good regular quartz watch.

The Metropolitan+ connects to your smartphone via Bluetooth. But it's not a constant connection like it is with a smartwatch, which makes it both a Good and Bad thing. 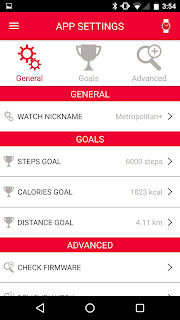 Why bad because: You have to manually sync the watch's recorded activity data to the app. It's not a huge issue if you're okay about syncing the data every day or at the end of a week, it’s really easy to forget to do the manual sync. I keep forgetting to sync the data and when I remember to do it, all the activity data is already gone because the watch only stores a week's worth of activity data. After a week it starts fresh again. Hopefully they change this or I remember to sync it regularly.

You can buy the Timex  Metropolitan+ Exclusively on Amazon.
Author Kashy On April 28, 2016
Labels: Reviews, technology